The phrase Gestural Glass is a reference to both Steve Job’s recent object, the iPad, and the work of someone lesser known who dramatically changed our culture: artist Marcel Duchamp. 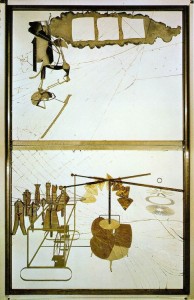 Shigeko Kuboto once said Marcel Duchamp had all of contemporary art dancing in his palm. Yet even today, decades after his death on October 2, 1968, no other contemporary artist has risen to challenge his dominance, though many have tried. He created The Large Glass, a work on glass, which like most of his art work creates a mirror reflecting his viewers and their world which he inhabited. But in California, beginning in the late 1970’s we began to hear about the vision of Apple’s CEO, Steve Jobs. His story carried a similar echo.

In a keynote address, Steve Jobs gave at Stanford University he talked about what brought him into his unique relationship with technology. Like Jobs, many people who were adopted and so forced to see through an outsiders eyes, find themselves incapable of institutional thinking. He attended Reed College briefly, but could not resolve his feelings of guilt for the cost it forced on his working class parents. Nor did he see how the value he received would justify the cost, so he dropped out. But still, he hung around and audited a calligraphy class. It is this course which he attributes to the development of his unique vision when working with technology. But why did he choose calligraphy? It makes perfect sense. Calligraphy provided insight into a mark made through the movement of a hand. It teaches the mark maker control of gesture, efficient beauty, an understanding of contrast and form, and it provides a connection to the history of our written language. If you add this knowledge to Job’s interest in engineering, you start to understand why Jobs early choices resulted in his development of one of the first and most elegant graphical user-interfaces for the  microcomputer.

While news about Steve Jobs and Apple’s new device was surfacing, the work of former Apple employees at Palm was being attacked mercilessly by financial analysts and the media in a way that had nothing to do with the elegance of their new technology (webOS). The comments were neither reasoned, fair, nor reflective of their work, but were swept along by the momentum of those whose profits would rise if they failed. What Palm had overlooked, and what Steve Jobs understood, was the value of the story and the story teller as an integral part of any consumer technology. Palm is not the only company to overlook this; Dell, Microsoft and to a lesser extent Google, have all forgotten the value of the story and story teller to their relationship with their users and so their competitiveness. And in the end their markets will likely wither. 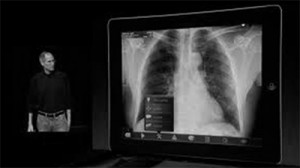 Steve Jobs showing an x-ray on the iPad, as he introduces it.

With the iPad, Apple has created a new platform for viewing the world. It is like an old x-ray film the technician pulls out of a sheath, allowing us to peer into our bodies and what lies beneath our skin. But in this case, we hold the film outward to envision and construct the world around us. The form of it is simple, visual and gestural, like a stroke in calligraphy. HP, Microsoft, and even Palm create amazing gizmos, but they are only that: products of gizmology. Apple has created more: a piece of elegant film embedded within a story and accompanied by a master story teller.

Through Steve Jobs stories and Apple’s indomitable marketing apparatus, Apple has exponentially expanded their reach. None of Apple’s devices are perfect; far from it. But they have the stroke of a unified form the only required foundation to base an anticipated and well told story. This unified vision began to emerge with the iPod. It provided a mobile platform that allowed people to fully and instantly carry, connect to and organize massive collections of music, merging artistic content with markets that seemed nearly invisible to the consumer at 99 cents.

Jon Rubinstein, (at the time of this writing, the CEO of Palm but formerly an engineer and manager at Apple), tells a story about how he came across a tiny hard drive in Asia, which captivated him. It was this fascination with a spinning device which resulting in the iPod. It created a new platform, where large amounts of content could finally become mobile. This unifying experience was recognized by Apple, and the iPod users were captivated and grew. This was a very different type of growth from that which formed the markets created by personal computers. Here, connection to content was the unifying force. It was not a tool but a platform which together created a social and emotional experience for the user.

The iPhone was the next step. It created a doorway which allowed computing to be brought into the fold occupied by iPod users. It may have seemed like a phone, but it was really a test of mobile computing as a valid platform. The test was successful, paving the way for the next device: the iPad.

The iPad changes computing because the experience of computing moves away from locally owned PC’s and into viewing windows (the iPad), which stream information to and from huge data warehouses, or “clouds”. If anyone wonders why there are so few ports on the iPad, it is likely because the ports will be software ports, connecting to data stored in the cloud and allowing wireless connections to other input devices such as video cameras.

The move towards “Apps” is also unique as it allows Apple to gain access rights over content; where before you linked to content on the web via a URL, you now find yourself opening an App, specifically tailored to the Apple operating system. Owners of content must develop an App instead of just putting up a link if they want full participation. And rather than get free access, in many cases consumers will have to pay a fee for the privilege of accessing the App. Apple has found a way to monetize content through design.

The iPad has also emerged as the primary form of publishing, not a replacement. The content of a book remains the virtual form of the book, but the object of the iPad moves forward as the primary physical form of a book. It is not only an e-reader, it is the primary object, the desired object, the iconic object, carried along by the momentum of its followers, informed by Job’s story telling.

Brick and mortar retail outlets like those of Barnes and Noble become portals to physical versions of books, whose paper, ink and cardboard become secondary to the iPad’s primary object. Slowly and methodically physical stores are being transformed into event theaters for author presentations, week-end outings, and cultural events which evolve into promotional vehicles. This is why companies like Barnes and Noble have invested time and money in developing an “App” for Apple’s iPad, even while developing their own competing e-reader. The primary status of the iPad as primary object is present in other areas of media as well. But the metamorphosis from an older to newer form is most striking in book and periodical publishing. It is here where we can finally sense an acceptance of the loss of paper to our fingertips.

Microsoft, Dell, Google and Palm can all try to compete with Apple now, but they have very little chance of success. Unless they can embed their technology in a better story, with a story teller better than Jobs, they will fade. Very few talented engineers believe in the value of story or the beauty of gesture. And that unique difference will remain Steve Job’s advantage.